The Nyx is a gigantic homage to a figure much loved in Gallente society. It was the biggest Capital ship of it's time, the perfect Carrier they say. Armed with the most deadliest Fighters to exist, it shall conquer the whole Universe and troughout.

The Nyx is a large, flat Carrier with a massive health pool and the fourth most Fighters in the game. Contrary to what many may believe, the Nyx has decent firepower for a Carrier but functions leagues better with fighters than without.

The interior is simply just a empty box, it can currently not be reached. 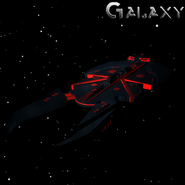